The physical appearance of the two MacBook Air models is one of the main distinctions. The M2 MacBook Air is the most recent model. Therefore Apple updated its appearance to match that of the revamped 14-inch and 16-inch MacBook Pros that debuted in late 2021. Apple has abandoned its traditional wedge form factor in favor of a more conventional flat design with a uniform thickness housed in an aluminum casing.

Compared to the M1 model, the M2 MacBook Air is slimmer and lighter. It weighs 2.7 pounds, which is 0.1 fewer than its predecessor and has a height of 0.44 inches, compared to the 0.63 inches its predecessor had at its bulkiest point. The difference in weight is so minute that it is barely perceptible in everyday life. Speaking of thinness, the M1 MacBook Air was only 0.16 inches thick at its narrowest point, thanks to its ingenious wedge shape.

The M2 MacBook Air's design immediately distinguishes itself by departing from the original Air's signature wedge form factor. Instead, the M2 model takes design cues from the larger MacBook Pro 14- and 16-inch siblings, with squared-off sides and rounded corners. Although the MacBook range loses a little personality (and extreme thinness), this standardization is a net positive.

The M2 MacBook Air's keyboard is not drastically altered from the M1 model, although it does look more like the keyboards on the bigger MacBook Pro models. Full-size function keys are located along the top, and the Touch ID button looks slightly different than on the M1. 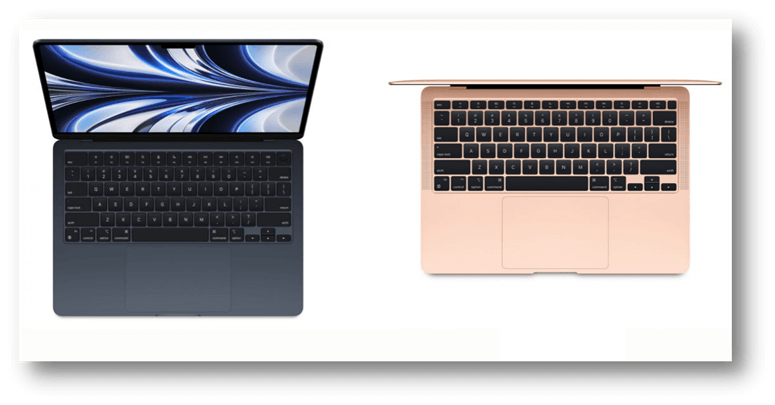 The stereo speakers on the M1 MacBook Air are located on either side of the keyboard. In contrast, the M2 MacBook Air's four-speaker array is located between the keyboard and the hinge. Dolby Atmos in the internal speakers and real-time head tracking with Apple's premium AirPods headphones are just two examples of the Spatial Audio technology made possible by this new speaker system.

Apple's M2 processor-equipped MacBook Air, the year 2022: Not a fan of the cutout? You'll have to accept this limitation if you want an M2 MacBook Air.

What, you don't like the notch? You'll have to accept this limitation to get the M2 MacBook Air.

New M2 MacBook Airs sport a 13.6-inch Liquid Retina display with narrower borders. The notch on the top, similar to the iPhone, may annoy some users. But the notch isn't there for no reason; it hides a high-definition (1080p) FaceTime camera. The maximum brightness of the display panel has been increased to 500 nits, a gain of 25% over previous generations. Also, it can display up to a billion different hues. 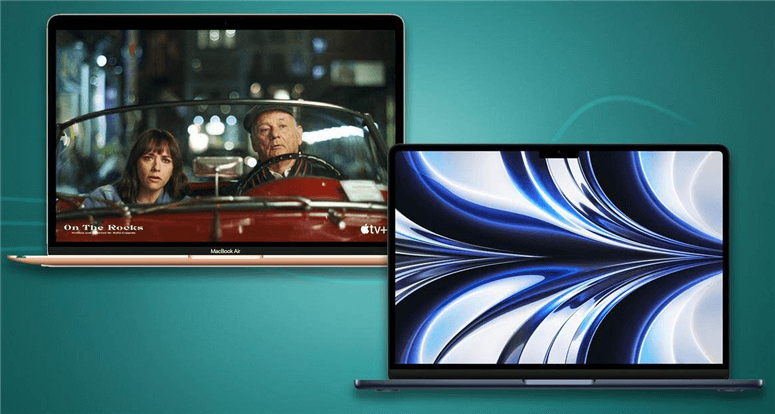 On the other hand, the 13.3-inch screen on the M1 Air is Retina and can produce 400 nits of brightness. FaceTime's camera does not have a notch, but it tops at only 720p.

Apple claims that the M1 and M2 MacBook Air models offer up to 15 hours of web browsing and 18 hours of movie playback with the Apple TV app. By adopting a slightly larger 52.6watt-hour battery, Apple can compensate for the increased power consumption with the M2 Air's larger, brighter display and quicker processor. That's an improvement over the 2020 model's 49.9 watt-hour battery.

However, the M2 Air has one trick up its sleeve: it can quickly charge, restoring half of its battery life in 30 minutes. You will need a 67W USB-C power adaptor for this, though. Apple only included a 30W power adapter with the new laptop's base model to keep costs down.

The M1 MacBook Air, which retails for $999, remains in the range for people on a tight budget who primarily use their computers for online browsing, word processing, and media playback. However, the 14-inch MacBook Pro is the best choice if you place a premium on having access to the most processing power, having active cooling for prolonged hard workloads, having a brighter screen, having more ports, and having better support for external displays.

The M2 chip is a welcome update to the 13-inch MacBook Pro, but this doesn't mean everyone should rush out and buy one.

The 2022 MacBook Pro and Touch Bar come with fans, which is the biggest difference between the two models. However, the 14- or 16-inch MacBook Pro is better if you're concerned about performance and heat. The new MacBook Air features the 13-inch MacBook Pro lacks, including a larger Liquid Retina display, a 1080p camera, MagSafe charging, and more.